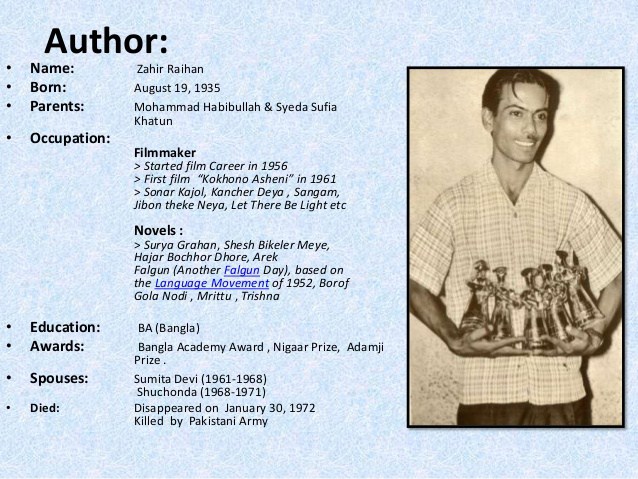 Zahir Raihan (19 August 1935 – 30 January 1972) was a Bangladeshi novelist, writer and filmmaker. He is perhaps best known for his documentary ‘’Stop Genocide’’, made during the Bangladesh Liberation War. He was an activist of the Language Movement of 1952. The influence of the language movement was so high on him that he made his legendary film “Jibon Theke Neya” based on his experience. In 1971 he joined the Liberation War of Bangladesh and created documentary films on this great event. He mysteriously disappeared on January 30, 1972 trying to locate his brother, the famous writer Shahidullah Kaiser, who was captured and killed by the Pakistan army. Evidences have been found that he was killed by some armed Bihari collaborators and disguised soldiers of Pakistan Army.
During liberation war in 1971 one film maker and producer Fazlul Haq wrote a letter of allegation against Zahir Raihan. He wrote; Sheikh Mujib, awami league and six points has been passed over in “Stop Genocide” documentary. He also condemned Zahir Raihan for using V. I. Lenin’s photo in his documentary. Fizlul Haq requested Mujibnagar government to take an action against Zahir Raihan. But on the contrary, the acting Prime Minister Tajuddin Ahmad appreciated the documentary. Stop Genocide won an award in Tashkent film festival in 1972. It also won the SIDLOC award at the Delhi film festival in 1975.
This letter has been included in “Bangladesh Liberation War documents” which is given below.
Memo No. PS/SEC/III/110, Dated 10th Sept., 1971.
To
The Prime Minister,
Government of Bangladesh.
Sub: – Letter of Mr. Fazlul Huq, regarding exhibition of a documentary film produced by Mr. Zahir Raihan.
Please find enclosed copy of the letter of Mr. Fazlul HuQ, the Film Producer –Director of Bangladesh. The letter is self-explanatory. I would request you to kindly look into the charges leveled by Mr. Fazlul Hug and decide the matter on its own merit keeping in view the best interest of our country.
Action taken in this respect may please be intimated to me in due course.
(Syed Nazrul Islam)
Acting President.
Enc: Copy of letter
(1 sheet)
…………………….
Sir,
This is to put a serious matter, in my belief a matter of great National Importance, before your honor regarding a documentary film directed by Zahir Raihan, which we have viewed to-day in a private show in Calcutta.
This documentary is being financed by Eastern India Motion Picture Association and being produced by Bangladesh Chala-Chitra Silpi O Kalakushali Samity in association with Bangladesh Liberation Council of Intelligential. This would be sold to India Government to show it in India and other countries.
The film start with a photo of V. I. Lenin and with his wordings shows nothing but little of refugees in India and a little part of our liberation Army Training Camp. But the serious setback is, in my opinion, that there is not a single shot or word about our beloved leader Bangabandhu Sheikh Mujibur Rahman or Awami League or, the six points.
I believe if this film is shown in India or abroad, the viewers shall have the belief that our liberation is being guided by something else and not the points we believe in. If the film has been made by any Indian Director, we shall reserve our comments, but when it is made by a Director of Bangladesh we cannot sit idle. I, personally, protest against this film and I request you to immediate action to stop this film before it is shown to the public through the Indian Government.
If it is not done, I alone, am ready to start a movement.
With deepest regards,
Sd/ -Fazlul Huq
Film Producer-Director of Bangladesh
C/o. Mr. Benoy Roy, 114/A, Park St.
Calcutta-17.
The President,
Government of Bangladesh
Mujibnagar.

This site uses Akismet to reduce spam. Learn how your comment data is processed.